March 21, 2008
Hurray!!!!!
We, 18 students of Perm State University, are the luckiest people in the world. WE ARE FLYING TO LONDON. Isn’t it great? We are packing our things, thinking about souvenirs to buy, places to visit. We have overcome all the official procedures. Fortunately we have got no problems with visas, with tickets.
Sorry, no time to describe our feelings. Assure you, we are excited about our future trip. See you on the 24th of March.

March 24, 2008
Here we are! Thank God we are in London safe and sound! The flight was OK. We had some food and drink (not alcoholic, of course). Frankly speaking it was a bit tiresome as far as the flight lasted for 2 hours to Moscow and 4 hours to London. Besides we had to wait for some hours at Sheremetievo. But we believe studying in London is worth a try.
So it’s Monday today. Everybody is speaking English!!!!!
Now we do understand English people saying “British weather is very changeable”. It is snowing, raining, then the sun begins to shine. But we are happy just because we are here in the centre of London. The families we live in are absolutely lovely and nice people. Our college is in the centre of London on Oxford Street (by the way, do you know, that this street is famous for its shops, brand names). We don’t know our teachers yet, but hope they are lovely.
We have bought the Oyster Cards for the underground and bus (24 pounds for the week). We have phoned our parents.
Being here in London is absolutely UNBELIEVABLE!!!!

We are together on London Eye. 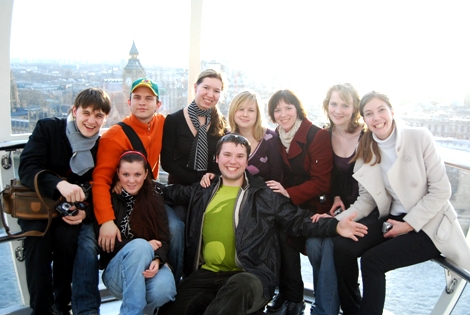 March 25, 2008
It’s Tuesday. The weather is fine, but windy. In the morning we decided to take a stroll around the place we are going to study at. We were in St.James Park. It’s gorgeous. The ducks are swimming, the flowers are everywhere. What is more you can feed the squirrels. They are funny.
Our teachers Chiara and Merlin are lovely, we do understand their English, which is perfect. In the college there study a lot of students from different countries, that is fairly nice. So we guess we will have an opportunity to get acquainted with some of them. 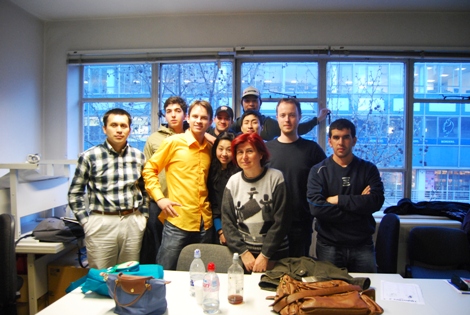 March 26, 2008
It’s Wednesday. In the morning we had an excursion to the National Gallery. There are so many pictures, so many famous artists. Some of us adore art, they bought some books about art. The Big Ben is superb. It is so magnificent. We took pictures of it from different angles.
In the evening we are going to drink beer in a pub. So now it’s time to go to the classroom. See you.

Big Ben is gorgeous, isn't it? 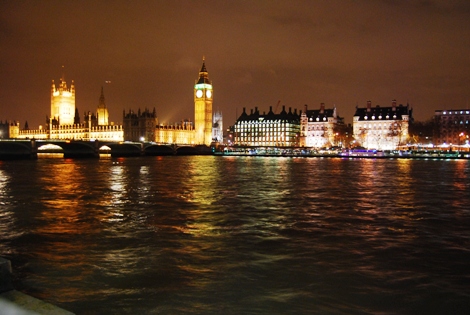 March 27, 2008
It’s Thursday. Our pub visiting was very successful yesterday. We ordered jacket potatoes with different fillings and beer. We chatted about everything and watched football. It seemed to us that all English men decided to watch the match in our pub as far as there were so many men.
Today in the morning we have visited Westminster Abbey. The architecture is magnificent. It is really a something. We have bought some souvenirs for the relatives and friends.

March 28, 2008
It’s Friday.
Today we have tried to visit the Houses of Parliament but unfortunately it was closed for the visitors. They said to come on Monday, so then we decided to see the Tower of London. The weather is far from being perfect. The Tower of London is very impressive. There we got the audio-tours, walked, looked around and listened to some interesting facts about this place. There are some really blood-freezing places, such as Bloody Tower. There you can see some torture tools. Brrr! At the moment there was an exhibition of Crown Jewelry. Are the exhibited things authentic or not? We guess not, but still they are really sparkling.
In the evening some of us will watch a musical “We will rock you!” So we will write about our impressions on Monday.
So that’s all for now. We have a weekend ahead. We are planning to have a river cruise (hope the weather will be fine), to go shopping and to have great time.

The Tower Bridge is not far from the Tower of London. It is great at night!!!! 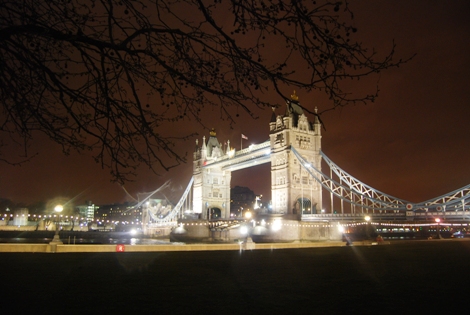 March 31, 2008
It’s Monday. Time flies.
We have some much news for you to share.
First of all about the musical. It was SUPERB, FANTASTIC, OVERWHELMING!!!!!!!!!!!!!!!!!!!!! We would recommend everyone to fly to London just to watch a musical. You can’t but start singing, clapping, dancing, shouting and doing all the things you are not supposed to do in Russia at the theatre. We couldn’t express all the feelings with words. We can only scream and shout from joy – AAAAA!!!
Then on Saturday we were at Windsor Castle. There we could feel the spirit of London, the Queen’s life, and what is more we could see the Queen’s collection of dolls. They are really masterpieces.
On Sunday we had a river cruise on the Thames. Luckily the weather was shiny, so we had an opportunity to admire the river, the nature, Greenwich (by the way it is pronounced as /Grinich/). We took a lot of photos of the buildings, river and so on.
Today in the evening we are planning to visit the Houses of Parliament to see the parliamentary debate. See you tomorrow.

April 1, 2008
It’s Tuesday.
We should say that we were quite impressed by the architecture of the Houses of Parliament, its magnificence. We have been to the Houses of Commons and the House of Lords. Unfortunately there were no debates, probably because they were discussing some trivial things (about land and crime). The Houses of Commons is of green colour and the House of Lords – of red one (we don’t know why). We hadn’t stayed there for a long time, just several minutes in each, that’s all.
Today in the morning we have been to Harrods, one of the most expensive shops in London. It is really expensive. Not far from this shop there is Albert Museum, there are collections of Asian cultures. What is more interesting it has got the clothes collection of different times. That was really amazing.
On Wednesday we are planning to see Changing of the Guards at the Buckingham Palace (hope the weather will be fine, otherwise we can’t see it). It’s time to go to the classroom. See you.
At the Houses of Parliament we were given
special stickers with a number on them. 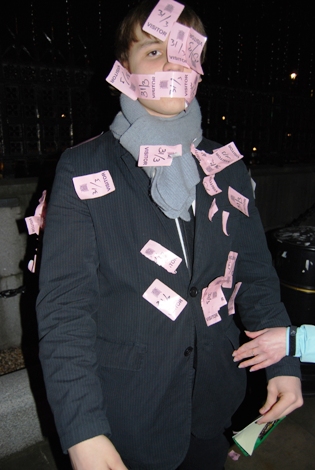 April 2, 2008
It’s Wednesday.
The weather is far from being perfect. It is raining cats and dogs. So as a result we couldn’t see the Changing of the Guards. We decided to do it on Saturday.
We are very lucky to have such a teacher as Merlin because yesterday instead of a class we had an exciting excursion “Jack the Ripper”. We walked through the places where Jack the Ripper killed his victims. That was really thrilling.
We like spending time here in London and don’t want to get back to Russia. Unfortunately pretty soon we’ll have to leave. We are taking every moment here. We enjoy the night London life going to pubs and discos. That’s really great.
Tomorrow we are visiting British Museum. We will write about it tomorrow.

April 3, 2008
It’s Thursday.
British Museum is fantastic. It has got so many different things. We saw the Mummies and all the stuff connected with them, sculpture, Greek statues and so on. We guess you won’t find such things in Russia. That is unforgettable.
Up to now we haven’t written a word about the families we are staying with. The families are fine, they are lovely and friendly people, although sometimes we don’t understand them. For example, every morning most of us have the same English breakfast – toast, jam, coffee/tea, a fruit, flakes with milk. Aren’t they bored having the same breakfast all their life? It’s incredible. The English people are very economical about water. You are allowed to have a shower 15 minutes a day, no more. If you are late you should tell them about it.  On the whole we don’t have any problems or troubles with the families.
Thanks to our teachers at Oxford House College we have an opportunity to socialize with the foreign students. Sometimes we have classes together with them. We discuss different problems, typically relationship between boys and girls. It was very interesting, sometimes strange, sometimes unexpected to hear their opinions.
So that’s all for now.

We socialise a lot with foreigners. 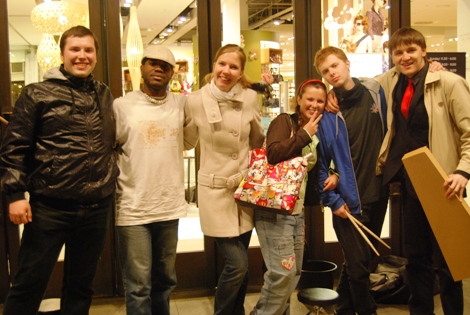 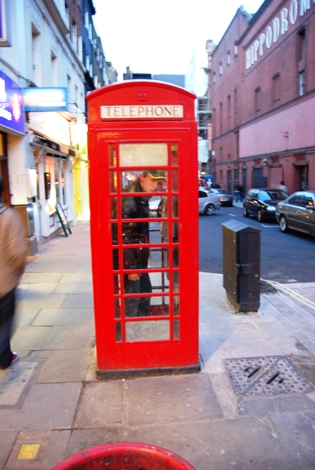 Mutallapova Irina
The most impressive and unforgettable events for me were musical “We Will Rock You”, the Museum of Sherlock Holmes and Greenwich park, where everything was in blossom. I guess I will remember about this London trip for the rest of my life.

Zhuravleva Maria
The excursions to the popular places were super. I could admire the pictures at the National Gallery. Westminster Abbey impressed me by its architecture. The most unusual thing for me was that there are many clean and large parks, where you can do some sports, walk around, have rest, just relax. There are flowers everywhere. That’s really incredible. Greenwich is superb. I would recommend everyone to visit this place.

Pyankov Aleksandr
I was very lucky to watch the musical “Sparmelot”. That’s fantastic – the music, the actors, the costumes, etc. As for the studies I have learnt some new words from “Pub English”. I guess they are very useful while staying in London. London night life is very bright and eventful.

Demina Anna
What I really like about my studies at Oxford House College in London is the way the English was taught. You don’t feel as you are on a lesson. You speak English effortlessly. It was a good idea to put on a music while we were discussing some points. What is more you don’t see the difference between you and the teacher. The relationships between the students and the teachers are not too official, too strict. I believe that helps me a lot in me learning English.
The most unforgettable excursion for me was an excursion to Westminster Abbey. The building is really magnificent.

Trubina Irina
What really impressed me most of all is that in London there are a lot of Asian people, students. They are everywhere. You can’t but see them at the shops, at the college, in the streets, etc. I believe London is truly an international city.
The way we were taught at Oxford House College was really great. We discuss different interesting topics, such as current movies, pubs, fashion, etc. The atmosphere was very friendly, not highly academic. So we were relaxed and could express our ideas without thinking much about the mistakes, grammar. I was very proud of myself by the fact that we spoke English.

Popova Natalya
I was impressed by the friendly atmosphere at the College. There are a lot of student from different countries, with different mentality, customs, traditions. Nevertheless they understand each other perfectly, they are eager to socialize, make friends, exchange opinions. It seems to me that political atmosphere doesn’t influence the relationship between people.
You know I read a lot about Great Britain, London, its places of interest. I saw a lot of pictures, photos of London, but thanks to this trip I had an opportunity to see, admire and touch all the things I saw in books. That’s amazing.
Назад
Для взрослых
Для детей
Международные экзамены
Обучение за рубежом
Электронная почта: littera@psu.ru
(342) 239-67-77 (342) 237-63-35 (342) 237-16-45 г.Пермь ул.Генкеля 5а, ПГНИУ, корпус №3,каб. 608
© 2004-2014 ЦДО «Littera»